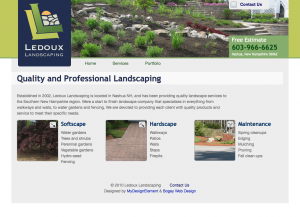 Worked with my designer friend Devin again on a simple brochure site for a small landscaping business.  Built the site off a scaled down version of my Bwd 3 theme framework.  Designed the header to contain not only the beautiful aesthetics Devin had designed but also semantic HTML for SEO value (instead of just making the contact info part of the image) and used CSS selectors to keep the HTML as clean as possible.

Things I learned: Two firsts on this theme.  The first time I had worked with shortcodess.  The 3 blocks on the home page are built using shortcodes so they can be easily edited via the edit page functionality inherent to WordPress.  It was also the first time I had played extensively with the built in gallery and media library of WordPress.  Though we ended up using a plugin for the portfolio the experience caused me to reevaluate the power of this built in functionality and use it further on my site.